Have your children and grandchildren helped you to heal and grow?

One spring day when I am nearly sixty, the stubborn self-criticism that has not yielded to decades of inner work evaporates in the noonday sun, catalyzed by an expression on the innocent face of my one-year-old granddaughter.

It happens in the park on the grounds of Wellesley City Hall.  My friend, Jeanne, who lives in that town and has been a particular favorite of Alexandra’s since the day they met, comes with us to visit the ducks.  Alexandra toddles happily up and down a little bridge over a brook, stares at the other babies, delights in the ducks, and begins to explore the rest of the scene. Enormous old trees, newly leafed, offer shade, and a few wooden picnic tables the hospitality of a place to sit for refreshment.

Keeping an eye on her unsteady toddling, I notice Alexandra beginning to draw back. Following her sidelong gaze, I see that she is fixed on a picnic table upon which, full length, fully clothed, and supine, lies a large man. The image is a strange one, and Alexandra is clearly frightened.  Quickly I say: “It’s okay, sweetheart.  It’s just a man taking a nap in the sun.  He looks funny, doesn’t he, lying on the table like that? Everything is all right.  He’s just taking a nap in the sun.” She has had enough of the park for this day, and we head for home.

An epiphany for me: the look in the eyes I saw on Alexandra’s face is a mirror of my child-self.  For me, though, no single event accounted for an underlying and continuing experience of puzzlement and fear. Vigilance and dread were not passing miseries; and, worse for me, nobody noticed. 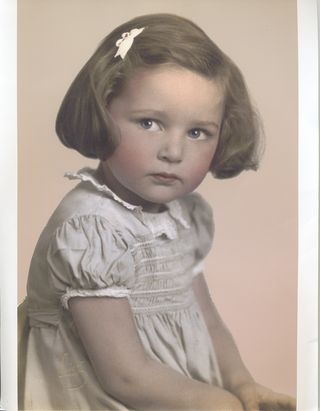 I began to understand the roots of these troubles early in my psychiatric training, in the late 1960’s, when I discovered Winnicott’s writings that addressed the crucial matter of “self and other-than-self” in ways at the same time practical and poetic. The titles of a couple of Winnicott’s books – The Child, the Family, and the Outside World, and (my favorite) Playing and Reality – give an idea of his range of focus.

Dr. Donald W. Winnicott was a brilliantly creative psychoanalyst and specialist in childhood emotional development. I was drawn in particular to his conception and lucid description of the critically important role of the parent or caretaker of a baby in reflecting back accurately that which the baby is experiencing. For the most part this occurs naturally in the course of living, often non-verbally and sometimes with words. The key matter is that the baby’s experience be seen clearly, so that the reflection is a true one. Winnicott made the point that being responded to on the basis of being seen clearly both helps a baby to learn to know her/himself and establishes a foundation for trust in the outside world.

My training in child psychiatry left me with the sense that whatever I can do to help parents better care for a child is oftentimes more effective than whatever I may be able to accomplish directly with a small child in my office.  It is the parents, after all, who create and sustain the child’s environment and who respond to the child’s steady needs.  Occasionally I find it useful to meet together with a mother and her baby or toddler in order to observe the interaction between them.

One particular experience in my private practice of psychiatry demonstrates how a simple acknowledgment of one child’s experience helped her to manage strong feelings. In this instance, I am working with a young mother who has consulted me for help with some difficulties of her own.  One day she tells me that she is at her wits’ end with the angry outbursts of her three-year-old daughter, whose tantrums have escalated since the birth of a baby brother.  I decide to meet, once, with the little girl.

Lilly, at three, is pretty sharp. I get out a large pad of paper and some crayons to play “the squiggle game,” a game devised by Winnicott. First I scribble a large abstract scrawl on the paper, then invite Lilly to “make it into something.” Next it is Lilly’s turn to scribble a scrawl, and my turn to “make it into something.”  Lilly isn’t particularly interested in playing the squiggle game by my rules.  Instead, she takes the black crayon and begins to print, large, saying:

I look at what she has drawn, take another crayon and make a couple of circles:

I say: “Wow, Look at what you have made –a face with big teeth!”

Lilly gets up and begins running and dancing around the room, and soon the session is over.

The following week, her mother begins by asking what in the world I could have done that has settled Lilly down. Apparently the little girl has been relaxed and pretty happy since our meeting. I took out the drawing with the M’s and W’s, and both of us were impressed with the relief Lilly experienced simply by having her feelings of anger and rage seen, accepted, and reflected back to her accurately.

That incredible day in the park with Alexandra and the man on the picnic table brought me face to face with the realization that, as I child, I had been as innocent and as good as she. My friend Jeanne’s witness to this event in the context of all that she knows of me helped to bring the realization of my childhood innocence and worthiness home for good.

A few months later, another sunny day in another park with Alexandra occasions joy of equivalent healing power. Alexandra is sixteen months old that August afternoon at the Boston waterfront near the aquarium. Pigeons. Popcorn.  Alexandra toddling.  She can just about manage to hold a bag of popcorn in one hand while throwing kernels at the pigeons with the other. Delight.

Too soon, Alexandra reaches into the bag and discovers that there is no …  more … popcorn.  She is at first surprised, then clearly distressed. A moment later, she stoops down to the sidewalk, picks up a single kernel, and puts it carefully into the empty bag.  She looks into the bag and says “Bye-bye,” then looks away.  She looks back into the bag at the single popcorn, says “Bye-bye,” and is consoled. Unprepared for the end of her pigeon-and-popcorn adventure, Alexandra has devised a way to let go of the popcorn on her own terms.  At sixteen months she is already learning to take care of herself.  I am astonished and very glad.

A loving note penned a few months later by my dear friend, Elissa, for the fete of my sixtieth birthday, concludes with this benediction: “May you always have the capacity to replace that last kernel in the bottom of your paper bag!”